This past week I attended the NCTM Regional Conference held in St Louis, MO.  At the conference, one of the sessions I attended was by Rita Barger from the University of Missouri-Kansas City about commons myths about learning and succeeding in math.  This series of 5 posts will share what I learned from the session. 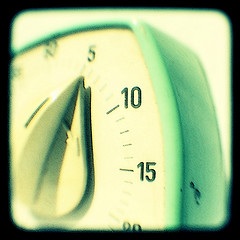 The “five minute” belief is believing that if you can’t figure out a problem in five minutes or less, you won’t be able to figure it out.  I think it’s safe to say, that many people give it much less than five minutes.  There are times where I wish students would just try it for five minutes.  How often have students tried a problem and gave up after only a moment because it has become challenging?  I see this belief every day I teach.

Our traditional teaching methods, where we tell kids how to do something before allowing them to try it on their own.  By telling our students how to do everything before they even try, we kill the curiosity in our students that would allow them to try to find their own way to solve a problem.   In many cases, they have never had a true opportunity to find, or try to find, solutions on their own.  And, if this is how we are going to teach our students, why would they bother to try to figure it out? We’re just going to tell them the answers anyways, right?

I think this belief might also stem from our students fear of failure and fear to make mistakes.  If every time they make a mistake, we are lowering their grades, why would a student take a risk to figure it out on their own?  When students are only trying to get the highest grade possible (and who can blame them with the education system we find ourselves in today), why would they care about learning if they can find an easier way to get the grades they need (mimicking and copying you, the teacher).  This is another topic in itself that I’ll save for another day.

Rita also suggested that students have come accustomed to seeing problems solved very quickly, through  current TV shows that solve numerous problems in under 30 or 60 minutes.  Maybe it’s not just TV shows, maybe seeing us (the teachers) work so easily and quickly through example problems make things look as if they should go much quicker and smoother.  Maybe, as teachers, we need to make mistakes and display struggles more frequently to let our students know that it is normal and acceptable.  I have a hard time picturing how I would do that, but it’s something I’m thinking about now.

A student might give up on problems quickly, before you even feel they’ve given it an honest effort.  Sometimes, before beginning a problem, hands will shoot up in the air, asking where to start.  Other times, it might be an “I don’t get it” before even reading or looking at a problem.  And instead of asking valuable questions, they simply expect you start it for them and work through it “with” them.

I would also doubt that students who possess this belief ask a classmate, a friend, a family member at any point.  They probably also don’t look back at any resources they have to help them out.  They didn’t get it in the first five minutes, it’s hopeless.  Why bother trying at all?

What can we do about it?

Rita suggests that teachers can generate a “did you?” list.  A “did you?” list is a checklist that students would need to go through before getting help from you, the teacher.  It would include items like “did you ask a friend?”, “did you check your notes?”, and any other “did you…?” questions that you feel appropriate for your students.  The hope is that over time, students should get used to going through this check and internalize this checklist.

She also suggested that brain teasers can be an effective way to counter this belief.  They can encourage students to think in various ways to try to approach a problem.  The brain teasers may get students in the habit of thinking and trying, instead of giving up.  When you give students a brain teaser problem, you do not give them the answer.  Even if they can’t arrive at a solution in the time you give them.  Rita told a story about one brain teaser that stayed on her board for over a month before a student was able to solve it.  This helps illustrate that the math done by mathematicians (and arguably anyone else on a day-to-day basis), is never complete and answers don’t always come quickly or easily.  Rita suggested that talking about the Four colour theorem, and the history of it, would be a great way to further illustrate this point.

Have you seen this belief in your class?  What have you done to counter it?

Some rights reserved by * hiro008

Five unhealthy beliefs in math that exist today are:

The “you have to be taught how” belief is the belief that you can’t do anything mathematical until someone shows you how. When I think about this belief, I wonder if it were true, how math would even exist to the extent it does today? Clearly, the mathematicians who have established the mathematics we teach our students, weren’t held back by this belief. That being said, I know that not every student that steps into my classroom will be a mathematician. Maybe none of them ever will, and that’s okay. I’m not in the business of generating math Phd’s, but rather, I hope my students can think critically and not be afraid to approach problems they might not yet understand. And, if students feel that they need to be taught how to do something before trying it, we have a big problem.

I’m currently 7 weeks into my student teaching.   Recently, I have drastically changed things in my classroom. My classroom used to look like the classroom I had when I was a high school student….